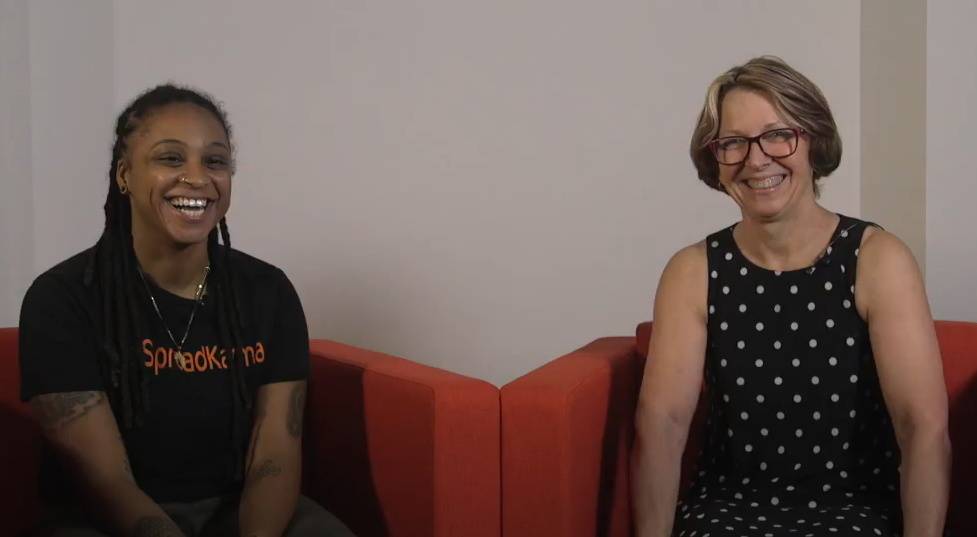 Kellie Brown, the CEO and Founder of Spread Karma, a fundraising platform for social impact, attributes much of her success to the support she has received from the Baltimore community. Brown is from Philadelphia but says that moving to Baltimore was one of the best decisions she’s ever made, and a big reason for that is the mentors she has collaborated with to make her social enterprise a success.

“The fact that Spread Karma has received so much support from Baltimore is amazing,” Brown says. “All the resources, programs, expertise and mentors have been invaluable.”

Brown began to conceive Spread Karma in 2014 after seeing several programs she was involved with shut down due to a lack of funding. She observed that social entrepreneurs, like herself, have a hard time fundraising.

She envisioned a central location for the myriad positive initiatives organized by the city and the type of program. From sports and youth programs to health and LGBTQ+ programs, Spread Karma would promote all these initiatives and enable communities to support them directly through crowdfunding.

Brown became involved with Innovation Works after Ken Malone, co-founder of Early Charm Ventures read about Spread Karma in the Baltimore Business Journal. Malone contacted Brown to plug her into all the resources available in Baltimore to help social entrepreneurs. He encouraged her to take advantage of Innovation Works’ collaborative resource network that connects neighborhoods, entrepreneurs, social innovation assets, and investors.

“I didn’t have the full vision for Spread Karma like I do now,” Brown says. “I have entrepreneurial spirit, but no formal business training. I had a vision, but I didn’t know what steps to take next.”

Brown says that getting support from IW’s Mentor Network andEnterprise Development Pipeline was life changing. She beams about the Accelerator Program which features curriculum modeled off of  Santa Clara University’s Miller Center for Social Entrepreneurship and assigns two mentors to help each entrepreneur focus in on the key aspects of their business and develop a solid growth strategy.

“It put me on a path for success, a trajectory to make Spread Karma come to life,” Brown says. “It’s my baby. I birthed it. And now it’s thriving. It has grown into something I couldn’t have imagined.”

One of Brown’s mentors is Patti Chandler who immediately saw the value in Spread Karma. Chandler’s more than three decades of experience with non-profit accounting and fundraising endowment management had taught her that small businesses, nonprofits, projects and programs often struggled to get face time with major donors. At the same time, major donors in Baltimore were tapped out and spread thin.

“Spread Karma was on the top of my list,” Chandler laughs. “Offering crowdfunding to these organizations is something that is extremely attractive.”

“At the time, I didn’t know why she chose us, but looking back it makes perfect sense,” Brown says. “You can see the perfect marriage here between mentor and mentee.”

Through the Innovation Works programs, Brown received mentorship and insight from a half-dozen business veterans, each giving her different perspectives on how to get Spread Karma off the ground.

Chandler knew it was time to call a meeting with all the mentors.

“It was time to stop talking in circles around each other,” Chandler says. “It’s time for all of us to be in the same room, listen to each other and what Spread Karma wants to achieve and help them make decisions about how to move forward.”

Brown’s meeting with all the mentors was a game changer. Everyone left the meeting on the same page and energized, Chandler recalls.

“This mentoring enabled Spread Karma to pivot, to understand that its value is the education and coaching and support it provides small social enterprises,” Brown says. “It has also helped us to scale up to increase our positive impact.”

“We’re still aligned with my original vision, but now we also provide resources to guide and teach social entrepreneurs how to fundraise effectively to amplify and sustain their impact,” Brown says. “We offer the mechanisms to fundraise and the know-how to be successful. This is where we provide the most impact.”